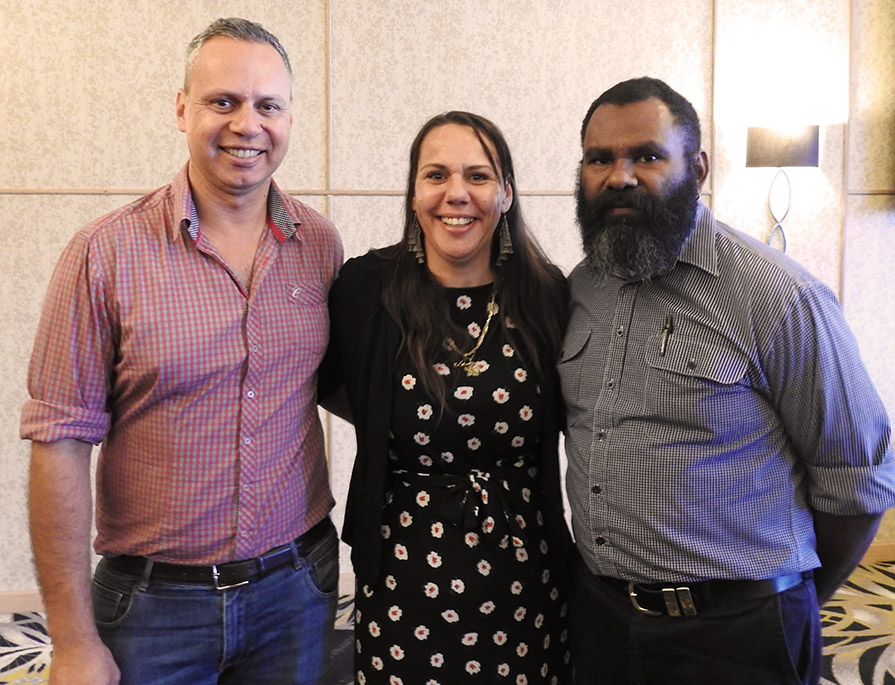 On Tuesday October 20, the Fraser Coast Regional Council (FCRC) through Leon Nehow and the Department of Aboriginal and Torres Strait Islander Partnerships (DATSIP), through Michelle Howden, invited proud Birra Gubba man Wayne Denning from Blackwater Central Queensland, to speak and inspire indigenous youth through two school visits in Hervey Bay and in a presentation at the Maryborough RSL. The Beacon attended the Maryborough RSL presentation and were totally inspired by the whole event.

Wayne Denning is the Founder, Executive Producer and Managing Director of Carbon Creative – a company that he formed in 2006 after a successful career in Federal Government. He is an inspirational, innovative and visionary man who speaks with passion and from practical experience on what drives, inspires and motivates him to create a company that espouses his values and his desire for social change. His initial inspiration started with his beloved grandmother, who was an excellent advocate in empowering those around her to believe that they could achieve success in whatever they set their minds to. She was his base, the seed of his core beliefs, the strength behind his social conscience and desire to promote indigenous people, and their creative spirit. It is her that continues to drive him to do all he can to ensure that indigenous children are given the education they need to succeed.

Wayne sees himself as a true entrepreneur – a person who sets up a business and takes on the risk to follow their ideas and dreams. When he set up his company Carbon Creative, Wayne had an idea and most importantly the belief and conviction needed to give it a go. He is the first to admit that business success is a series of ups and downs. True success is to accept the downs as part of the learning process and continue to follow the dream. It was the strength of belief that what he had to offer was worthwhile that gave his company its first real break- an achievement that has brought him much recognition and respect in his field.

Through his company, Wayne was the first Australian to have creative input in the hugely successful worldwide TV enterprise that is Sesame Street. Through his own initiative and talent he met with the Sesame Street workshop on Broadway in New York and pitched the idea that he can produce their No 5 segment and with indigenous talent and with the special help from Jessica Mauboy he was successful. His No 5 production with five kangaroos has had over one billion hits on YouTube. Creative Carbon still produce one segment a year for Sesame Street which he does for the love more than any commercial capital. He also produces anti- domestic violence and anti-smoking ads that have realistic and confronting messages.

Wayne talked of the challenges that he faced in setting up the company. He spoke extensively of the hurdles that he jumped and walls he knocked down in becoming a successful entrepreneur and business man. He readily admits that there have been failures, but they are greatly outweighed by his successes. Wayne spoke of the challenges of creating content for TV and the difficulties of securing funding for projects. He spoke of his TV program ‘League Nation’ which was shown on NITV in 2016 and was very successful. He told of the interest from Fox Sport that was shown in buying the content, and the disappointment when unfortunately little came of it and the show was closed. Through all of this, Wayne continued to reiterate that failures are always going to happen, but they should be looked at as a part of growing, of learning to do things better. They should not deter you from following your dreams.

Leaving the presentation, one could not help feeling a sense of empowerment as Wayne instilled a belief that anything is possible with hard work. He impressed on all the need to constantly think creatively with a mind to innovate. To believe in what you do but be prepared to fail and learn from that. He challenged all to take a risk.

Quoting Martin Luther King and to paraphrase: “To get to your destination Fly. If you can not fly, drive. If you can not drive, walk. If not walk crawl, but never stop. You must always move forward.” Leon Nehow Principal Officer Indigenous Strategy and Policy (FCRC) and Michelle Howden (DATSIP) also spoke passionately about the creativity of the indigenous people and how they can start and grow their own businesses . They also spoke of the help new entrepreneurs may require, and the sense of community and support that was always around to help and guide

Judging by the determination and strength of character that Wayne has exhibited and shared, both young and old indigenous entrepreneurs can have no finer example than him, to give them the inspiration they need to follow their dreams.

Seb Gibbs | News | No Comments
A 36yr old man died from a from a shark attack off Fraser Island last Saturday afternoon (4th July). Matthew Tratt, a father of two from the Sunshine Coast and a...

A Cappella – it’s all about harmony and sisterhood Story by Marianne Kresse,  Photos supplied by Armella Pratt Did you know that Hervey Bay has its own A Cappella Chorus?…

Lisa Allan | Community, Local Life | No Comments
Background Image: Statue of Duncan Chapman in Queens Park, Maryborough. The first man to have stepped onto the shores of Gallipoli in World War I. Present Anzac Day is the...

Cate Akaveka from Books by the Sea, formerly Mary Ryan’s, has given the shop a new look at their new location on the Esplanade in Hervey Bay The book shop…

Kelsey Corcoran | Entertainment | No Comments
Every night when we lay down to bed our brain is busily creating situations from our unconscious. Dreams are a way of relieving stress and bringing to light what we...

From Gutter to Glory Success stories from Bayside Transformations Ice destroys lives. It tears families apart. But Joshua Alsop and Zack Walthall are living proof that the destruction caused by…

Tori-Jay Mordey is a 24-year-old local Indigenous artist who began drawing when she was very young. She was raised in the Torres Straits on Thursday Island but spent a majority…

Seb Gibbs | Environment | No Comments
Earth Hour 2019 8:30pm to 9:30pm Every year, for one hour, a movement of people turn out their lights in recognition of climate change.  This is a global event that first...

Dial A Driver (D.A.D) is a company created by owner Rob Braddock that has been servicing Hervey Bay and Maryborough since 1984. It is currently in the process of setting…

Marianne Kresse | Crafts | No Comments
Download Pattern To start off with, I decided to make the bunny out of easy obtainable items found in your nearest Spotlight store. He has been made with a white...

Danielle O'connor | Community, Environment | No Comments
You are never too small to make a difference A group of Hervey Bay children and adults have become part of a global grassroots network calling for climate change action....

I am often asked from where I source my inspirational stories. Is it from my worldly, educated grasp of current affairs? My uncanny ability at reading people, or maybe my…

Marianne Kresse | Local Life | No Comments
The cashless debit card is currently being rolled out in the Hervey Bay Area to a select group of 6000 people under 35 years old who receive welfare in the...

Kelsey Corcoran | Environment | No Comments
Story by Kelsey Corcoran Photos provided by Paul Aurisch Next time you see a dolphin in Hervey Bay, take a good look because it could be the newly-named Sousa sahulensis....

Marianne Kresse | Local Business | No Comments
If you haven’t heard the term ‘steampunk’ before, or not sure what it means, don’t worry - you’re not alone. If you have seen Hugh Jackman’s ‘The Greatest Showman’ or...