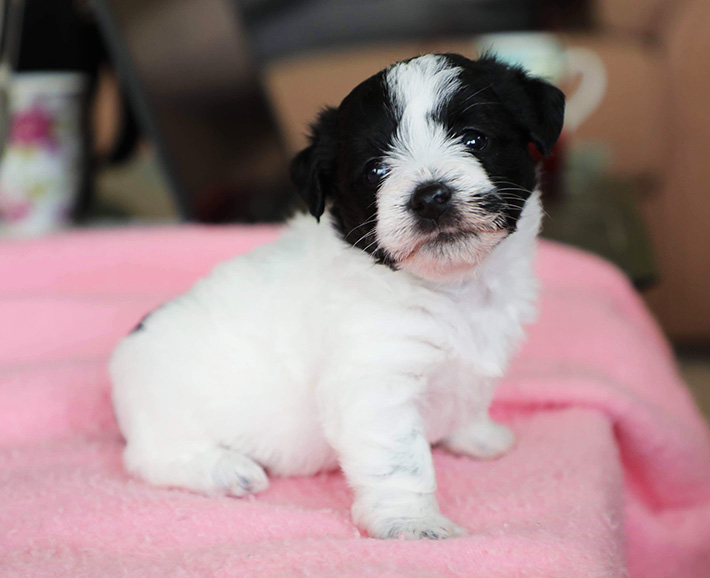 The Joy of Puppies

On September seventeenth 2018 my five-year-old toy poodle, Maisy had three puppies. We adopted Maisy at the end of 2017 when we saw an ad on gumtree saying she needed to find a new home. We already had Chester, a Tibetan spaniel X toy poodle, who at the time had just turned one and really needed a companion during the day. Maisy wasn’t desexed so we had to register her with the local council and get a breeders permit to own her

Most of the pregnancy had been easy but in the last few weeks, she was starting to be affected by it. She was no longer able to jump up on the bed each night or even on to the couch to watch TV and snuggle up. We tried building a ramp but she didn’t like it because it wasn’t wide enough for her. She also got an ear infection which meant she needed to have ear drops each day which she didn’t enjoy. On the sixteenth, we took her and my 2-year-old spoodle for a walk along the beach which they love but she had to be carried on the way back. She went from being three kilos to over five kilos which we now had to carry along the sand. Each night we would haul her onto the bed and she would lay on her back and let us feel the puppies kicking. On the seventeenth, she spent the day not wanting to move or be alone. I stayed with her all day and we watched children’s movies which seemed to actually calm her. Just before midnight, we had three tiny puppies that could fit in the palm of my hand. She had two beautiful black boys, one a bit browner than the other but each with a white paw and a black and white girl. We named them Finn, Bellamy and Octavia from the tv show ‘The 100’.

Over the next 10 days, Over the next 10 days, Maisy stayed with her puppies all the time. Feeding them and keeping them warm. The two year-old spoodle wasn’t allowed anywhere near where the puppies were sleeping but she still loved to play with him in the backyard. After 14 days the puppies started opening their eyes and ears. Each morning we would go in and see the puppies and now that they could see they would recognise us and try to wriggle over. It took a bit more time but at three weeks the puppies started to find their feet. They would wriggle around and their back feet and front feet would go in different directions and the puppies would land on their face. With a few more days they started to really find their feet and the next thing we knew they were running and playing as well as growing their sharp puppy teeth.

At 4 weeks the puppies could no longer be contained to a room and could climb over any barrier we tried to put in their way. Because their mother is so small she had to be able to jump the barrier to get back to them but they were big enough to climb over. The puppies now have free range of the house and we just have to keep the bedroom doors closed and have put a table across our carpeted living area which we have to move to get in and out.

We began to notice each of their personalities shining through and loved each of them in their own special way. Finn, the most terrier of the lot according to the vet, is the most playful, bouncy independent boy. Bellamy (Nicknamed Baby Bellamy because he’s the smallest and had short legs) is sweet, cuddly and quiet and loves to run with a toy in his mouth and to cuddle up with Maisy. Octavia is cheeky, spirited and loves to play a bit rough with her brothers but is also the most scaredy-cat as she will run for the cover of the couch when the phone rings.

At six weeks we had to take them to the vets to get their first round of vaccinations and microchips. They were all so brave and loved the liver treat at the end like a child and their lollypop after the doctors. The next day we received a call saying that Bellamy’s Microchip must have come out as they found it on the floor of the vets. We had to take them all back and make sure Finn and Octavia’s were still in and put Bellamy’s in again.

It’s now seven weeks and we’re teaching them as much as we can before they go to their forever homes next week. They’re learning how to play with each other, sit, eat solids and use a toileting pad. We know we’re going to miss them so much but also know that they will love their new homes and they will be much loved there.